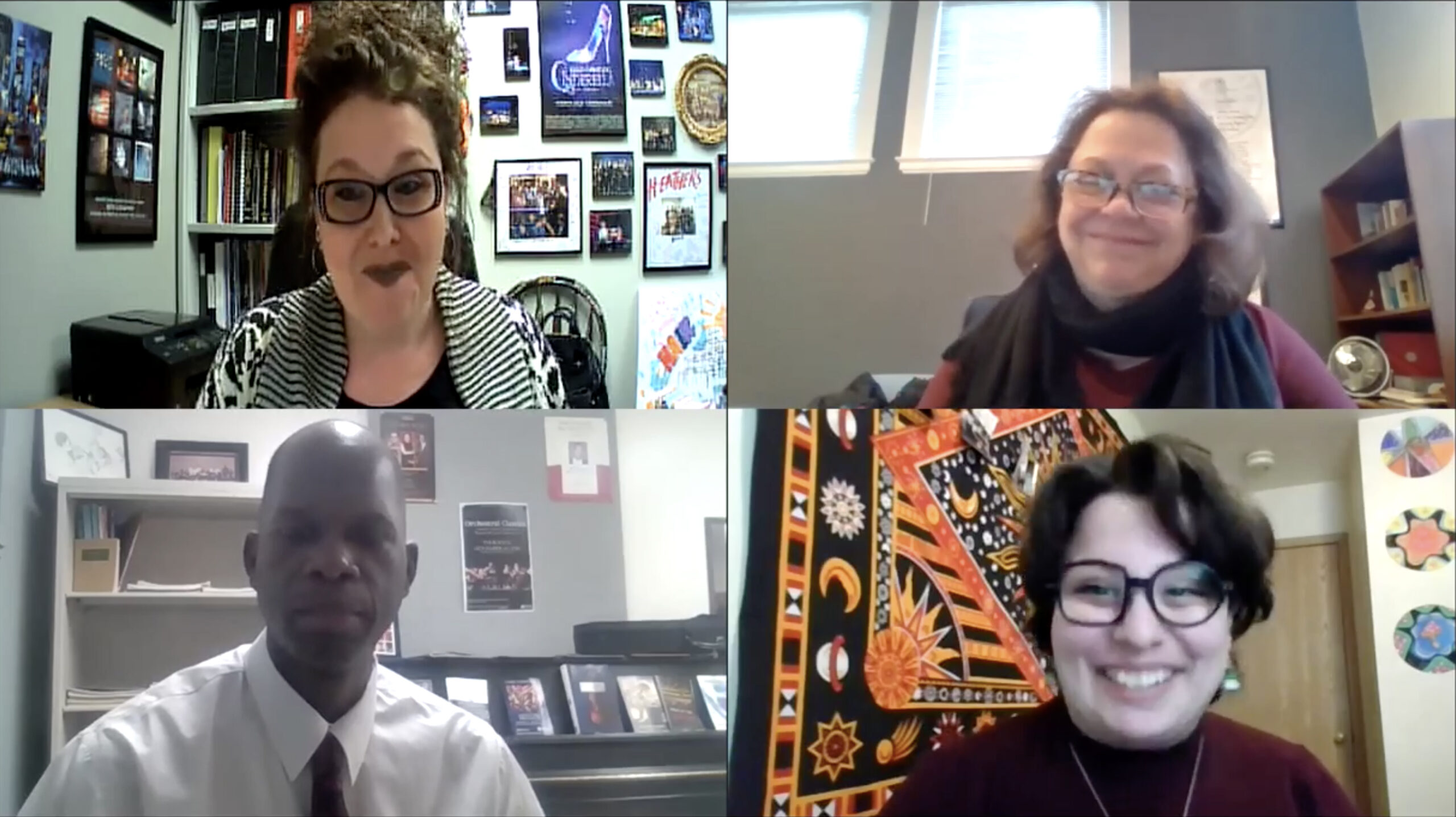 BMC: Welcome back. Alright Cece, before we jump into the program, will you just tell us maybe where you’re from, major, year, you know all those kinds of details?

CA: I am from Holtsville, New York. I am a junior vocal performance major.

BMC: Can I ask? I feel like I know part of the story, but, how did you end up at Millikin?

CA: So, I really did not know where I was going until very, very close to commitment day. Right after I graduated high school and a previous faculty member here Dr. Justin John Moniz, we went to the same high school, and we had the same choir teacher and so we had kind of been connected through that and he reached out to me and was like, “Hey, do you know about Millikin? We would love to hear you audition!” And I was like, “Great! I’ll send in a video!” It could not have worked out more perfectly. I’m really happy to be at Millikin.

BMC: Well I want to say that for anyone who is looking at Cece and they’re like, “Ah, she looks familiar.” I just want to say that she is the one who in the virtual vespers concert, she performed it live in 2019, but in the 2020 video she killed the solo in John Murphy’s Pachem which is like the big finale number. So, yeah, it was awesome, and I was glad we had an excuse to hear it again.

BMC: I bet, and she probably has it on video for, like, ever to come, right?

LL: It’s there for posterity.

BMC: So, Cece, can you tell us a little bit about the process of going through the competition and how that works for people that may be unfamiliar.

Cece: Yeah! So, all the music that I was already preparing was able to be used for Concerto Competition, so me and my voice professor, Mrs. Holmes, have been working on, especially “Let the Bright Seraphim,” for two semesters now. She was like, “Hey, do you wanna submit your name to audition for this?” And I was like, “Oh my goodness, absolutely! Singing with an orchestra! Yes! Sign me up!” And then, preparing for the audition, I really kinda forgot about what would happen after the audition because I was just so excited to sing on a stage with a real person playing the piano. I did the audition and went to a practice room for a couple of minutes and was like, “Oh my God, I don’t even need anything after this. That was the best!” And so, I’m really grateful, and so honored for the opportunity to perform!

LL: Now I just have to say this, this is an amazing example of performance learning. Not that we ever say anything about that around here. It isn’t very many people that in their college years get to get up on the Kirkland stage, a stage that size and a house that size, and sing with the Symphony Orchestra. That’s amazing.

CA: Yeah, I can’t stop smiling about it!

BMC: I was looking at your program and what I love about it is there’s so much variety. You brought up the Handel piece, I want back this week and listened to it. It is a beast, it is a marathon for you and for whoever is playing the trumpet part. I know that you mentioned that you and Dr. McClain had your own rehearsal and you said tonight is the second one?

BMC: Do you have a favorite moment, or favorite song of the three that you’re doing? I know it’s hard to pick.

CA: I think last night when we were going through my second song, I was standing on stage and just listening to them play and I had to close my eyes for a second and kind of pinch myself. I was like, “Oh my God, I’ve never heard this played by an orchestra.” And that was my favorite moment of the week so far. I had to remember it and take a little mental picture for myself.

BMC: Dr. McClain, what’s it like to work with students like Cece in a situation like this. I’m not going to speak for Cece, but I would be petrified. Then there’s a part of you where you let that go and the professionalism kicks in, even as a student. So, Dr. McClain, what’s that process like?

WM: I’m glad that you mention being petrified, because that’s sort of part of the process. But, first of all, our students are so well prepared.  And as you can see, very professional, and great personalities. One of the things that I feel, my job, I carry two caps. I am the director of the orchestra, but I am also an educator. So, I feel that providing an environment, a space where students can feel free to express themselves and to bring their ideas to the table is paramount within the context of this professional orchestra experience. So, Cece and I met just with the accompanist on Tuesday. And it’s really important for me because  I like to establish a relationship with soloists. I won’t speak for the students, but I think if they’re a little nervous, or as you say, petrified, it’s nice to have that moment where it’s just you and the conductor , and you feel like you have an ally on the stage. Although, from Cece’s description, it sounds like she’s having a ball no matter what! But I can imagine that for some, getting up on that stage and all of them playing behind you, that might be a little intimidating. So, it’s great if you’ve already had that personal connection with the conductor before all that happens. To me, it’s one of the highlights of the year. It’s one of the major reasons why I came to Millikin was the two soloists that I worked with in the spring. It really was a unique experience and it does happen at the professional level. Two professionals, a conductor and a soloist, but at a very small, you know, minimum sort of a way, where they’ll meet and it’s very cordial, but there’s not quite that kind of “Let’s be buddies, let’s connect,” sort of thing. I think it’s really cool what we can do here, in really connecting with students. I think, also, I try to find places where I can sort of poke the student a little bit to grow as well. I don’t know if Cece even remembers, but there was a moment last night where we were talking about tempo and I was wanting Cece to be more assertive. In other words, even though I’m the Maestro, the Director, you’re the soloist, right? And so at that moment the orchestra is accompanying and serving the soloist. So, I thought that was a great moment because Cece was able to articulate, “Yes, I’d like this to be little faster, or I’d like this to be a little slower.”

BMC: So Cece, is your mom going to watch the stream come Saturday night?

CA: My mom is going to watch the stream, she wants the video, she’s gonna make my family watch it over and over again. Yes, she is so excited!

BMC: When this video is posted on the College of Fine Arts page I’ll make sureI share it and  tag you so that your mom can see it.

CA: She would love that! She was actually really, really, asking me about the link and all that stuff for this too. I was like, “I will get it, I promise!”

LL: It’s too bad you won’t have a live audience in Kirkland. Just imagine all the people that will be watching that wouldn’t be able to see you in Kirkland. So, there’s that as well. They’re not there in the flesh, but they’re out there in the world.

LL: We’re all about the live chat.

BMC: So we will be there Saturday night. So let’s give the details one more time:

Saturday, March 6th, at 7:30 pm, streaming live from Kirkland Fine Arts Center onto the Millikin School of Music YouTube Channel. We already showed you how easy it is to find it, you can even set up a reminder so that you get an alert. And don’t forget that’s it’s happening on Saturday.

William and Cece thank you so much for taking time out of your afternoons to chat with us.

LL: And Break a Leg!

Want to support our efforts? Join the Guild, which works to support the Millikin-Decatur Symphony Orchestra and provide educational opportunities in our community. 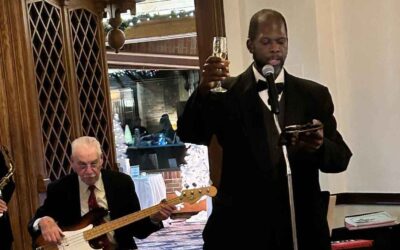 Highlights from “A Winter Wonderland”

Symphony Orchestra Guild of Decatur hosted the 2022 Holiday Gala on December 2, 2022. Guests enjoyed a Silent Auction, Live Auction, Fine Dinner and Lovely Music by Terry Brennan and Friends at the Country Club of Decatur. Take a glance through some of the highlights... 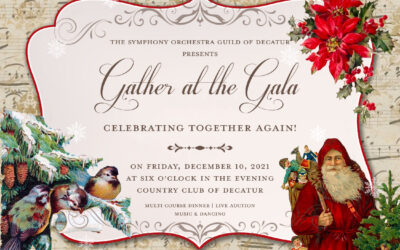 Gather at the Gala 2021 Live and Silent Auction 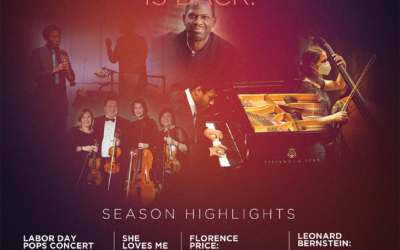 Dr. William McClain, Conductor, shares what to expect in the 2021-2022 season of Millikin Decatur Symphony Orchestra. MDSO is BACK!